Can the Sellswords make it to the castle?

Apart from Kings of War (where I run a human army anyway) I have never been into fantasy games. Recently, I have warmed to the idea. Even more recently Ganesha Games came out with new set of rules called Sellswords and Spellslingers. This uses the same activation mechanism as rules like Songs of Blades and Heroes, but differs in that it is designed for cooperative play.

One reason I like cooperative games is that the rules can be 20 pages shorter, and another is that my 8-year old son wants to get into gaming and I am afraid he will thrash me. This, then, is an after action report of a game with the aforementioned child.

But before the report, I have learned that you must always have a backstory for fantasy games. And that back-story should be cobbled together from bits of fantasy novels... so

It had been a 100 years since the wildlings had crossed the Black River (see what I did there). No one alive in the Bree could remember them having come that far south. Younger folk even laughed that there would be anything as preposterous as an actual troll. They are not laughing now. Most of the villagers had time to make it to Bree Keep where they would be safe from the marauding wildlings (or Orcs as they are sometimes called). Then a party of Sellswords (no spellslingers) arrived from the east. Quickly realising the orcs had come (from the despoiled sheep carcasses if nothing else) the sellswords had two options. The first was to make a break to the South down the track past the manor house. The second was to try to gain the safety of Bree Keep. Which would they choose?

The party need to make it to the Keep or off the table via the path. Wandering and Ambushing Monsters are chosen from those available by the player who's PC activated the card.

Below is the village of Bree. The sellswords can be seem running over the bridge at the top. The path to safety is to the left and the keep is visible to the right.

From the top of the keep, the villagers spy the sellswords crossing the bridge and give out a cheer. 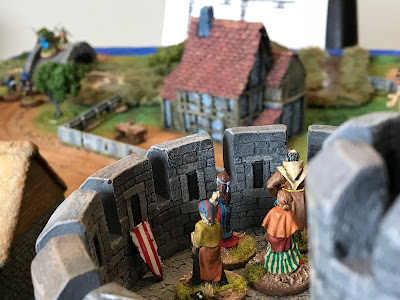 The sellswords can see the villagers safe in Bree keep, and decide that in that direction lies safety . 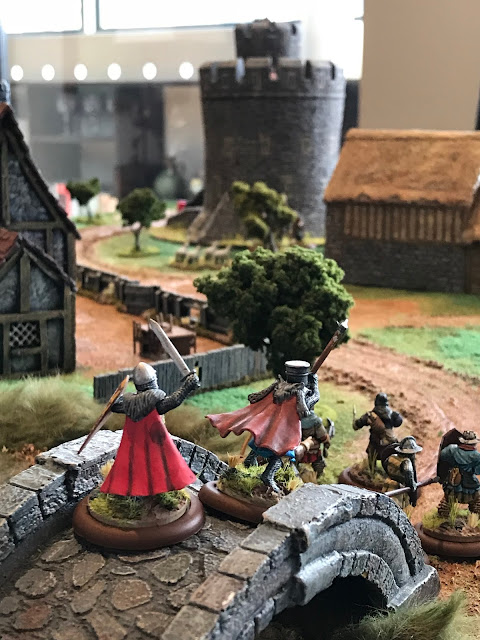 The Sellswords have not yet noticed the troll, though. 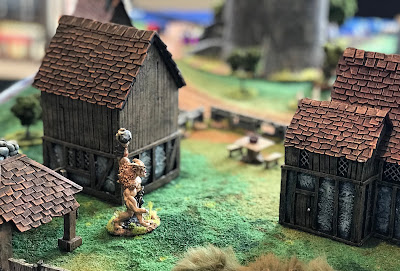 Nor that the village is crawling with orcs. In game terms orcs can ambush out of any doorway or bush. 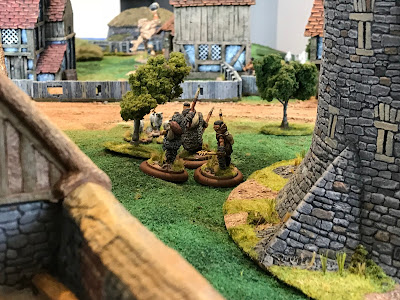 They also fail to notice the wildling brute brandishing a  stupidly big sword. 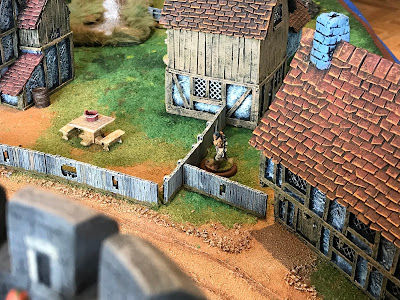 So our intrepid adventurers set off towards the safety of the castle. 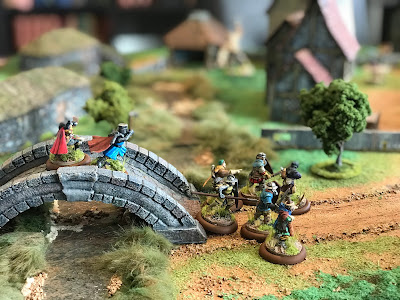 Not so foolish that they don't cautiously scout for the enemy (1 dice activations). 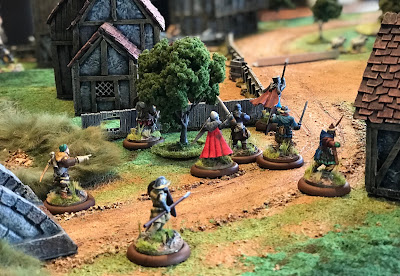 Our party soon realises they are being followed by an orc horde. Worse, the troll makes an appearance. Now trolls are not too bright (only reacting to enemy close by), and fortunately for the sellswords this troll spends its time pacing restlessly between the river and the road. 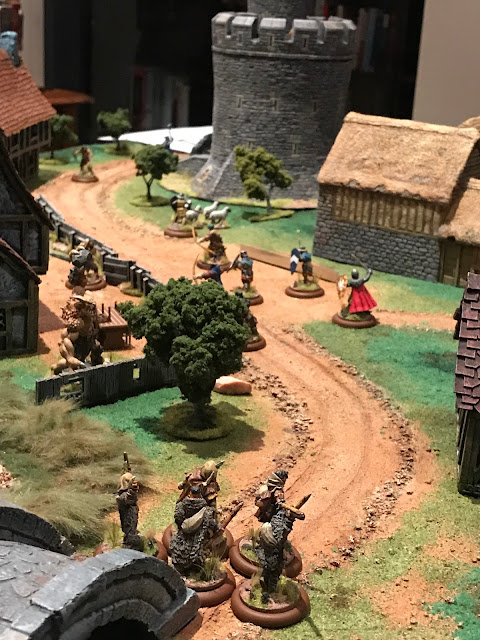 So now he fight begins; sir Robert dealing with the enemy to the rear... 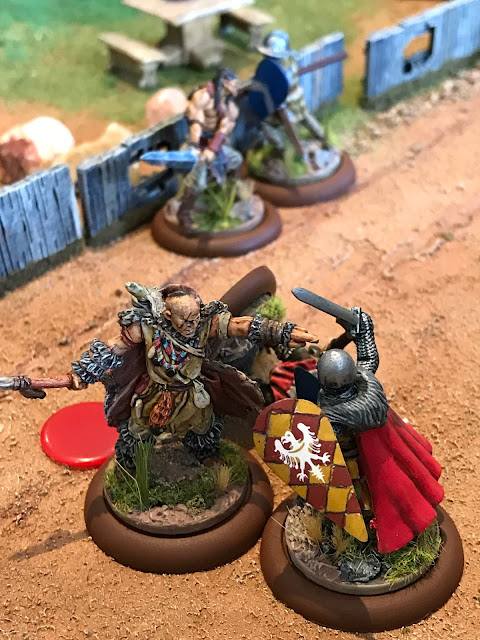 ...and Sir Connor clearing a path to the keep. 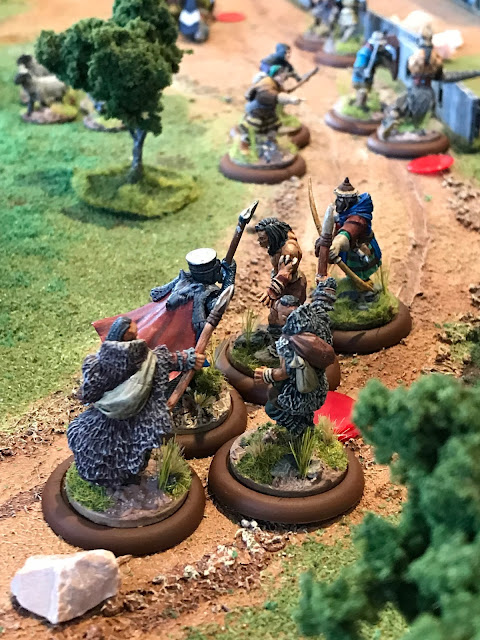 But the number of wildlings coming over the bridge grows with each passing moment. 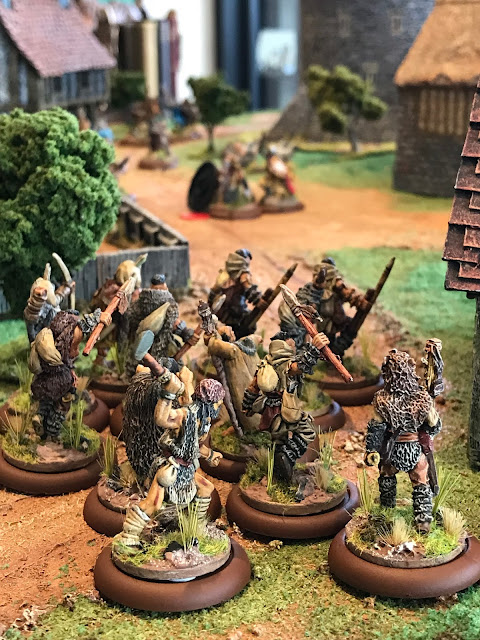 After finishing off an orc brute, Sir Robert notices the growing horde to the rear. There is one thing for it... run! 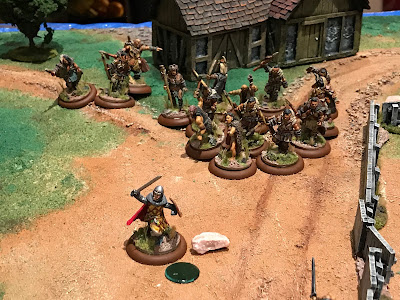 Unfortunately, Sir Robert chooses this moment to fall over, and is wounded from an axe blow from an orc. Lachlan the Swordsman has to run back to save the aristocratic twit. 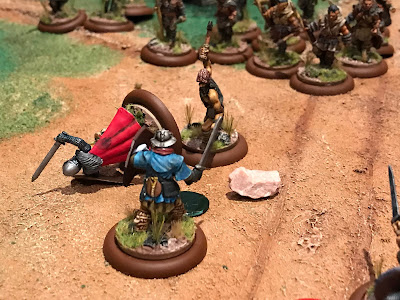 Meanwhile down the road Forrester Jeb is surprised by a wildling lady emerging from the doorway behind him. She beats him with her hoary fists. 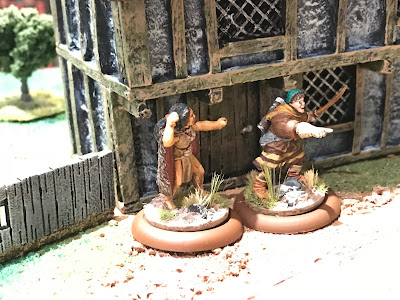 Sneaky Simon (now limping from a wound received earlier) comes to the rescue, but the wily wildling avoids his dagger. 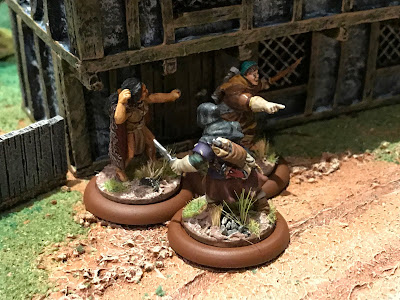 Sir Connor has to come and help his minions subdue this valkerie in furs. Meanwhile the horde of orcs moves menacingly up the road. 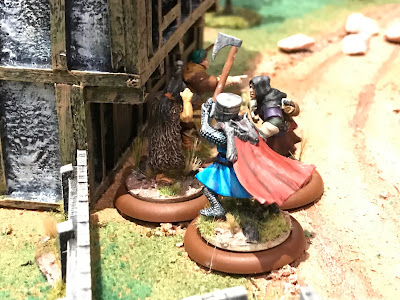 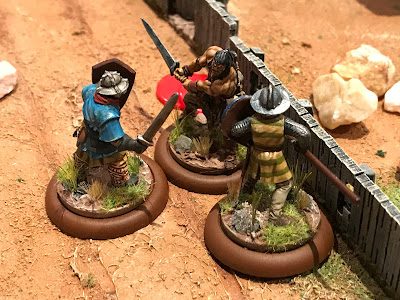 In fact, it is mayhem! 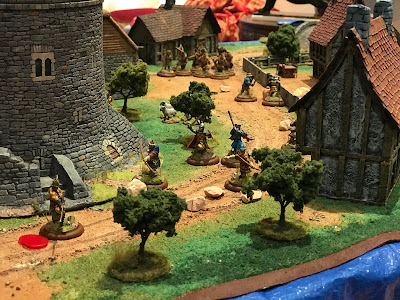 The wildling horde engulfs Simon and Lachlan. Lachlan goes down in a sea of smelly furs, Simon breaks away and runs for the keep. 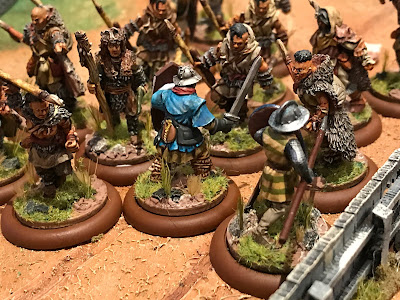 Now everyone is running for the keep, only the two knights slowing to fight the most persistent pursuers. 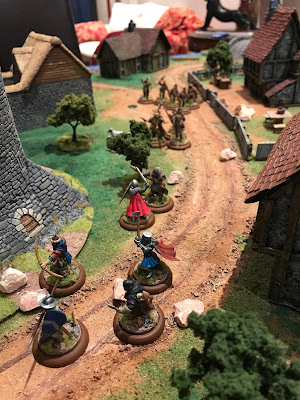 Till only Sir Connor backs up to the doorway swinging his axe. 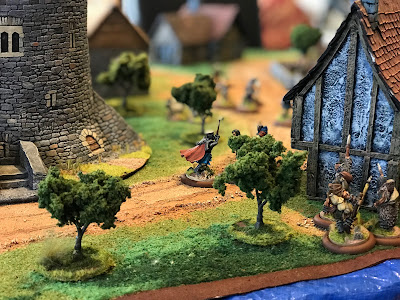 Sir Connor retreats step-by-step till he can gain the rest of the party in the safety of the keep. 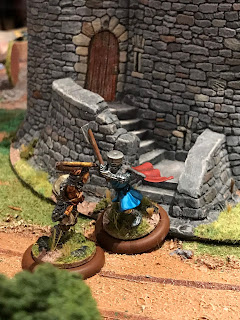 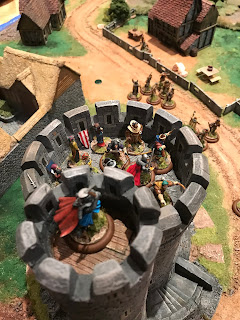 With the exception of the fallen, Lachlan, and Yeoman Bill are now orc food.

What a great game. It is fast, tense and it really feels like a chapter in a novel.
Posted by Almond at 1:34 PM